Our team has extensive experience in the patent monetization business. 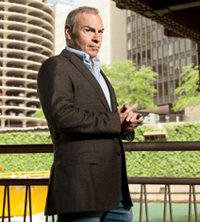 Over the course of the next several years, he built TechSearch into one of the premier patent licensing companies in the United States, generating more than thirty million dollars per year in revenues from patent portfolios licensed to many of the major corporations of the world, including IBM, Samsung, Sony, Mitsubishi, Motorola, Time Warner, AMD and DirecTV. In 2005, TechSearch and its affiliated companies were acquired by a public company.

Prior to founding TechSearch, Mr. Brown was a partner at the nationally recognized Chicago law firm of Jenner & Block, where he specialized in business and commercial law.

Mr. Brown has served as a director and senior officer of various public and private companies. He received a Masters in Law (Taxation) from Georgetown University, a Juris Doctor from Case Western Reserve University and a Bachelors in Arts from Oberlin College. Following graduation from law school, he served as an attorney for two years with the United States Securities and Exchange Commission in Washington, D.C. He also taught Business Law as an adjunct faculty member of the Kellogg Graduate School of Business of Northwestern University in Chicago.